Lessons from the Prodigal Son (Part 1)

Lessons from the Prodigal Son (Part 1)

The parable of the prodigal son has been heard through the ages and is packed with bright gems of wisdom for all of us to behold. In each blog, we’ll unpack some of those as we make our way through the parable.

Before we dive into the first part of the story, it’s important to understand that this parable isn’t an isolated story, but one in a combination of two other parables that have a common theme. The other two parables are the Lost Coin and the Lost Sheep. In each parable, it’s important to note that each one shares a common structure:

These common themes run through each story and the Parable of the Prodigal Son is no different.

With those thoughts in mind, let’s consider the opening part of the story.

And He said, “There was a man who had two sons. And the younger of them said to his father, ‘Father, give me the share of property that is coming to me.’ And he divided his property between them.”

First, in the Jewish community, this is not the traditional way that inheritances were divided. In fact, under Jewish law, the first-born son is supposed to receive a double share of his parent’s property (Deuteronomy 21:17). For the younger son to come to his father and ask for his portion first is to disregard the law and established practice of the time. This was probably a shocking and disrespectful request due to the fact that inheritances are usually given after the parents die.

There are certainly many perils to young people in life. They may think they have the answers to all of their problems, but unfortunately, they don’t have the life experience to make great decisions. A child who is about to walk out into the world on their own should be well prepared ahead of time for it to be a prosperous journey. There are many trials, especially in the teenage years that can hinder such progress, but parents should work to help their children make good decisions.

Perhaps even more shocking than the request of the younger son is that the father grants his request. The younger son would have received one-third of the inheritance (the older son would receive a double portion when the father died). The father would have been advised not to do this. Instead, the father endured the heartache and hurt that came with his son’s request and let him go his own way.

And this is what God lets us do too. We can go our own way if we want. Unfortunately, a decision like this can cause problems in the life of a young person that could follow them their entire life. We should all be mindful of the decisions we make and how those decisions can affect ourselves, and those around us.

Remember: “It’s the Situation Keeping My Connection with Him”.

I’m Lori Stith, The Stoicess, and I believe in You! 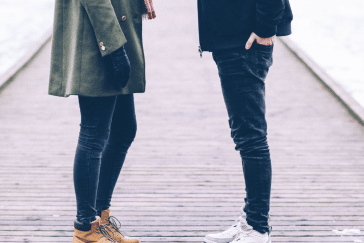 How to Make a Good Impression on a First Date

When you're on a first date, the “pressure is on” to make a good impression. After all, you want your

We met as colleagues at work. We've been dating for almost a year now. He's really handsome, witty, and I've

Join StoicMatchmaker Now
We use cookies to ensure that we give you the best experience on our website. If you continue to use this site we will assume that you are happy with it.Ok